Just a quick update of some things that are in the email I’ll be sending out later:
1. 25% bonus until the end of August on Tap Research surveys.
2. Alien Invader arcade tournament running until the end of August.
3. Prize tickets will be discontinued in September.
Details on this: In order to reduce complexity on our site for new users and pave the way for the Passive Game, which will feature another “virtual site currency”, we plan to discontinue Prize Tickets within the next month. We will convert any in your balance to Game Tokens Prior to doing this at the usual rate.

Our daily sweepstakes will continue only using GTs instead, as will our faucet switch over to paying in GTs. The first step of the conversion process will be to switch over the sweepstakes. The faucet will switch over a day or two later. Followed by an exchange of all Prize Tickets to GTs after these two changes are up and running.

4. Passive Pirate progress update -The main page template is largely complete where one can see their ships that they buy and purchase ships. Lots more to do, but we hope this game will be fun and rewarding for you! Here are some pics. 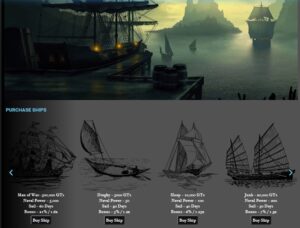